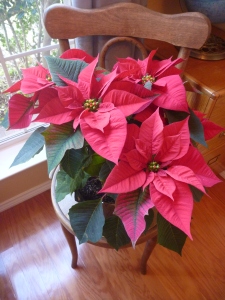 I know my name is Carol for a reason . . . because I am at my best when Christmas is before me.  But, on Wednesday of this week, I was less of a joyful song and more of a worried lament.  Little One and I were out shopping.  I was browsing for presents as he played underfoot.  Suddenly, I heard wailing, and my Christmas spirit took a dive.  Little One had tripped on a metal bar in the back of a rack and hit his forehead on the bar in front of the rack.  I gray line appeared on his brow, and a mother’s worst fears furrowed mine.  We left our cart full of presents and raced for the doctor’s office.  She reassured me that his fall really was the best case scenario, but I watched him and cuddled him the rest of the day.  His tears had dried up moments after his fall, but mine stayed close behind my eyes.  I wanted to rewind time.  If only we hadn’t gone shopping, I kept thinking.

Praise the Lord, oh my soul!  Little One is okay!  What a difference a day makes.  On Wednesday, I was a mess of sadness, but by Thursday afternoon, Christmas had found me again.  It came in a letter from Africa.

On Wednesday, I didn’t want to think about material gifts.  But today, I can’t stop thinking about plastic chairs in Uganda.

About a week ago, my husband had posed the question, “Why do we give gifts at Christmas?”  He was asking because he was feeling like many of the people on our list could easily afford to buy for themselves the exact gifts we were giving them.  We finally settled on love as the true answer.  We give gifts to show love.  Still, Hubby and I admitted that the best gifts were the ones that showed love and truly helped someone, were (maybe) even life changing.  We sighed, letting go of the hope that we could change, really change, a life this Christmas.

During that late night conversation, the little sum of money we had sent to our sponsor child’s family in Africa had slipped our minds.  Even if we had remembered, though, we would never have expected what was in the envelope that I pulled from our mailbox on Thursday afternoon.

A little sum of money, given back to God, had become not only plastic chairs, but also a small bed for three little boys to sleep on, doors for their sod house, shoes, clothes, food, and a plot of land.  (How far the dollar reaches in Africa!)  The parents and their three boys were beaming at us from the stack of pictures inside that envelope.  Yes!  They sent us a stack of actual prints, showing us what they had bought.  They said in their letter how they couldn’t believe someone had loved them so much.  Jesus loves them so much!  He loves all of us so much!  I was in tears again, but this time they were the sweetest kind of tears:  tears that runneth over as the presence of Jesus fills your being.  Jesus is the gift that changes lives!  He let us be part of a miracle!

P.S.  If you aren’t already sponsoring a child, it will bring you great joy to do so!  Compassion International encourages you to send your child Bible verses, drawings, stickers, pictures of you and your family . . . anything flat.  He or she will write you back (with the help of a translator), thus beginning the dearest sort of pen pal relationship!  Our little boy mentioned each little thing we sent him in our last letter by name, with thanks.  His gratitude was not unlike Laura Ingalls’ great appreciation for the tin cup and new penny in her stocking.

2 thoughts on “Plastic Chairs in Africa”

David Tolk kindly provided his song, “Grace,” for this site. Please click play to be transported to a children’s book world.